The reigning warrior of Black Panther returned to the much-anticipated premiere of the movie sequel “Wakanda Forever” in yet another glamorous red carpet look.

Danai Gurira arrived at London’s Leicester Square on November 3 for the first European screening, alongside other casts of Ryan Coogler’s epic American superhero film based on the Marvel Comics character Black Panther. The actress gave a nod to the sheer trend in a breathtaking black number from Elie Saab’s Fall 2022 Haute Couture collection. 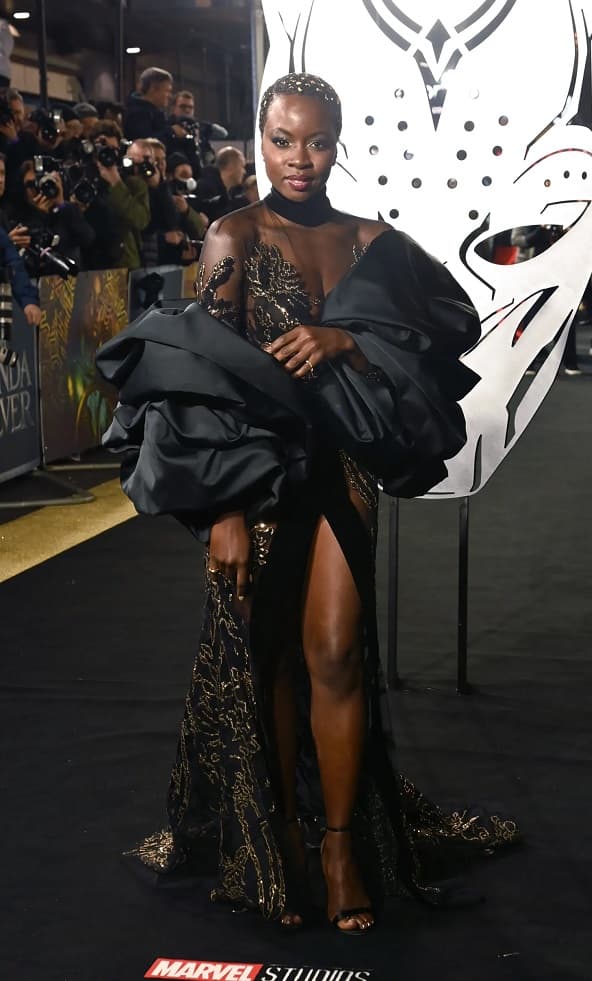 The gown, a masterpiece with glittering sequins and crystal embellishments finished with an exaggerated off-the-shoulder taffeta that guarantees both drama and glam. The gorgeous floor-sweeping number was completed with a pair of matching barely-there sandals, dark eyeshadow, purple lips, and of course, her signature short haircut. 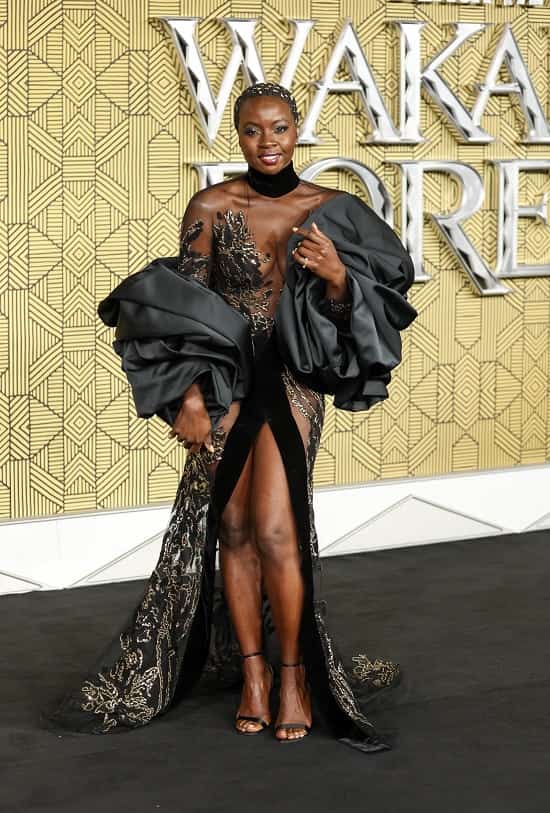 She took the Instagram to share a close-up look of her makeup, revealing that the look is an inspiration by “The Starry Night” — a famous painting of 1889 by Dutch Post-Impressionist painter Vincent van Gogh. The Multi Emmy winning Make-up artist Tym Buacharern, who created the look also revealed the products he used to add the feel of stars to Gurira’s glam.

“When in London 🖤 The #WakandaForever press tour continues. @makeupbytym’s inspiration for this look was Van Gogh’s #StarryNight ✨,” she wrote in the caption.

The American and Zimbabwean-born actress is one of Wakanda’s greatest warriors playing Okoye in the movie who proudly protects her country’s king alongside Dora Milaje. She serves the Black Panther as a personal bodyguard and the nation of Wakanda as a torchbearer of tradition and virtue.

Wakanda Forever is a tribute to the late Chadwick Boseman who met his untimely death in 2020 due to colon cancer. While speaking emotionally about the actor during an interview with The Hollywood Reporter, Gurira said: “You just never know when the experience of your grief is gonna hit. The first day it hit was when I walked into the throne room, of course, the tribal council room which had that beautiful throne that he would sit in. And I hadn’t seen that throne since we had lost him.”

Danai Gurira Stuns in a Fishnet Yellow Naked Dress
American Music Awards 2022: All The Gorgeous Red Carpet Looks
Viola Davis Dressed to Impress in a Beaded Gown at the HBZ's Women of the Year Awards
Lupita Nyong'o Shimmers in a Gold at the Lagos Premiere of Wakanda Forever
Danai Gurira Channels African Beauty In Christie Brown At The Wakanda Forever's Lagos Premiere
Jackie Aina is a Vision in a Shimmering Blue Gown and Fulani Braids
Rihanna and A$AP Rocky Twinned in Coordinated Looks at 'Wakanda Forever' Premiere
Beyonce Wears A Floor Sweeping Gown With Jay Z For The 2022 Wearable Art Gala
Share on FacebookShare on Twitter
Subcribe