When the official teaser for “Black Panther 2: Wakanda Forever” was released last month July, our first thought was Danai Gurira, following her interview at Met Gala which she spoke to Variety about the highly-anticipated sequel to Marvel’s superhero film. Gurira was very emotional during the rare interview and could hardly speak much — which of course, relates to the untimely passing of their lead, Chadwick Boseman, who died from colon cancer in August 2020.

“We poured everything we had into it and we hope you experience that and it resonates for everybody the way it does for us,” says the actress, who plays the role of Okoye, the protector of Boseman’s T’Challa in the fictional country of Wakanda. “It tells a very heart-wrenching story,” she hinted with a sudden feeling of unhappiness. “And that is all I can say!”

Danai Gurira discusses how "Black Panther: Wakanda Forever" pays tribute to Chadwick Boseman at the #MetGala: "It's all about him. It's all an outpouring to love and honor him." https://t.co/fJJbqtPY58 pic.twitter.com/4muSyIWcGe

But regardless of the sad memory, Gurira glowed in her blue ensemble, a stunning creation designed by a Nigerian designer, Taofeek Abijako of Head of State. The custom creation was crafted with a one-shoulder design and voluminous silhouette, which the American-Zimbabwean actress slipped in to boldly embrace the 2022 Met Gala’s Gilded Glamor dress code. 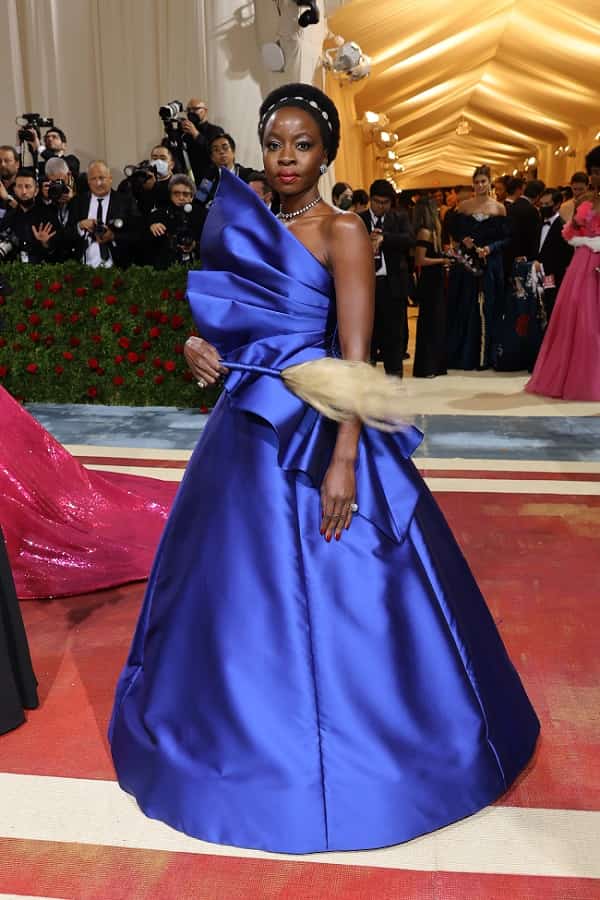 Known for the love she has for her root, Gurira’s dress was a celebration of her African identity, and Abijako drew the inspiration from Festac 77 (a.k.a Second World Black and African Festival of Arts and Culture), a historic place in the city of Lagos, Nigeria, where the international arts festival used to be held back in the 70s.

“This is an amazing young designer. He’s only 23 years old and started this when he was only 17,” Gurira told E! News while praising the young designer. “He’s [a] Nigeria-born American and so it’s this beautiful intersection of culture — the expression of it and celebration of it which I love because I am also intercultural in various ways. It was just a very organic connection. I’m very excited to celebrate his work today. He’s very special.”

At this point, however, we can all agree that Danai Gurira always slays. Whether she’s rocking a plunging neckline or a high-low hem, Gurira always manages to look chic. And whether on her shaved hair, braided or in Afro, her hairstyles usually depend on the mood as she always adds her own personal touch to each look. Ahead, keep clicking for the 12 times the actress has our collective gaze pinned on her red carpet fashion.

The actress looks pretty in a yellow gown by Alexander McQueen while attending the Free Shakespeare in the Park’s ‘Richard III’ opening night. (Photo: Getty Images). 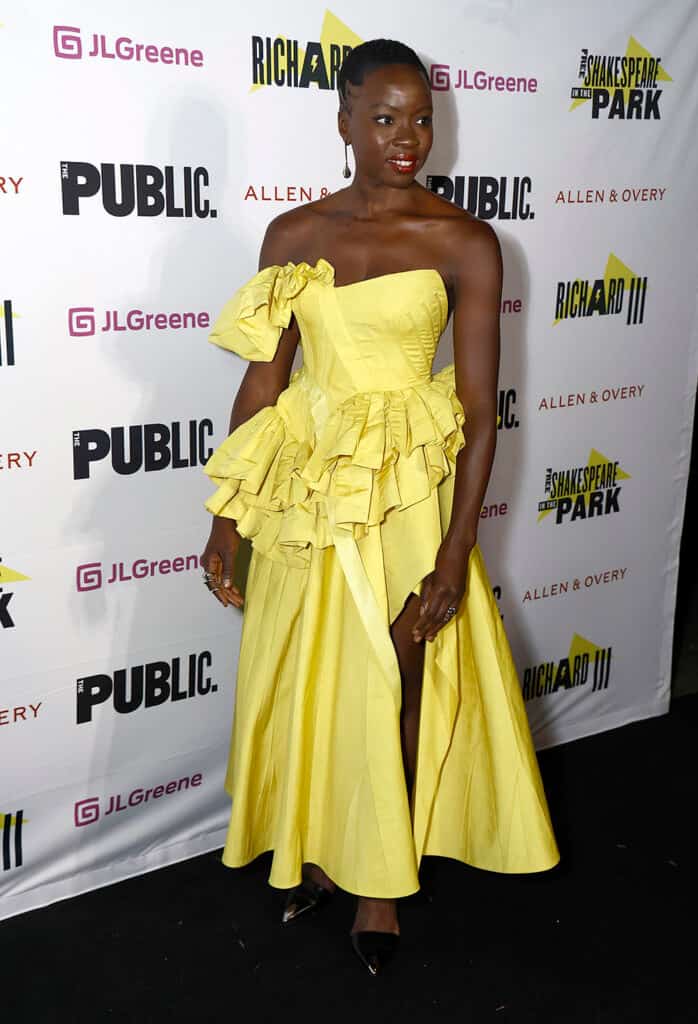 Danai Gurira attended the 2022 Public Theater gala on the Green in May 2022, wearing a neon green pantsuit from Sergio Hudson’s Spring 2022 collection. 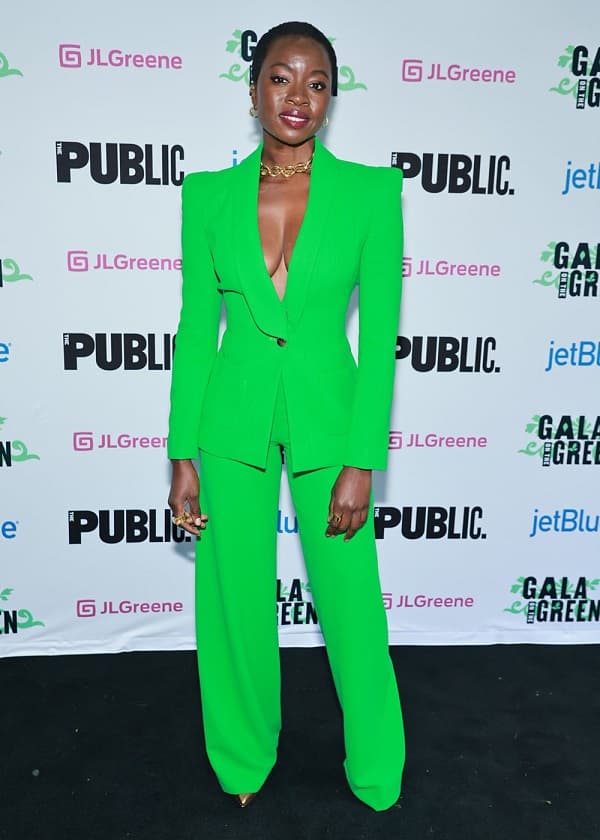 During the Avengers Premiere in 2018, Gurira wore a Zuhair Murad red gown with a deep plunging neckline. (Photo: Getty Images). 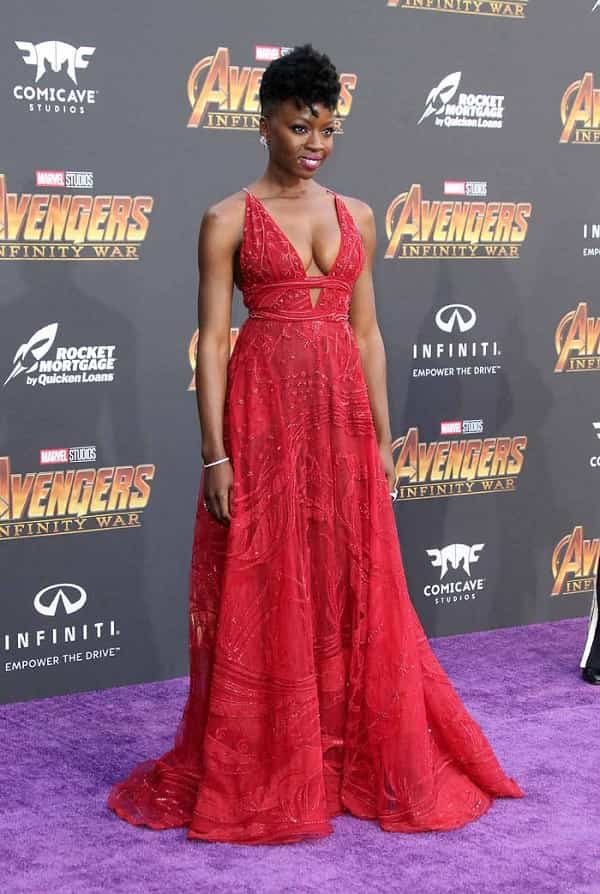 Danai Gurira was a golden goddess in a strapless, floor-length gown from Brock Collection during the 2019 Oscar Awards. (Photo: Getty Images). 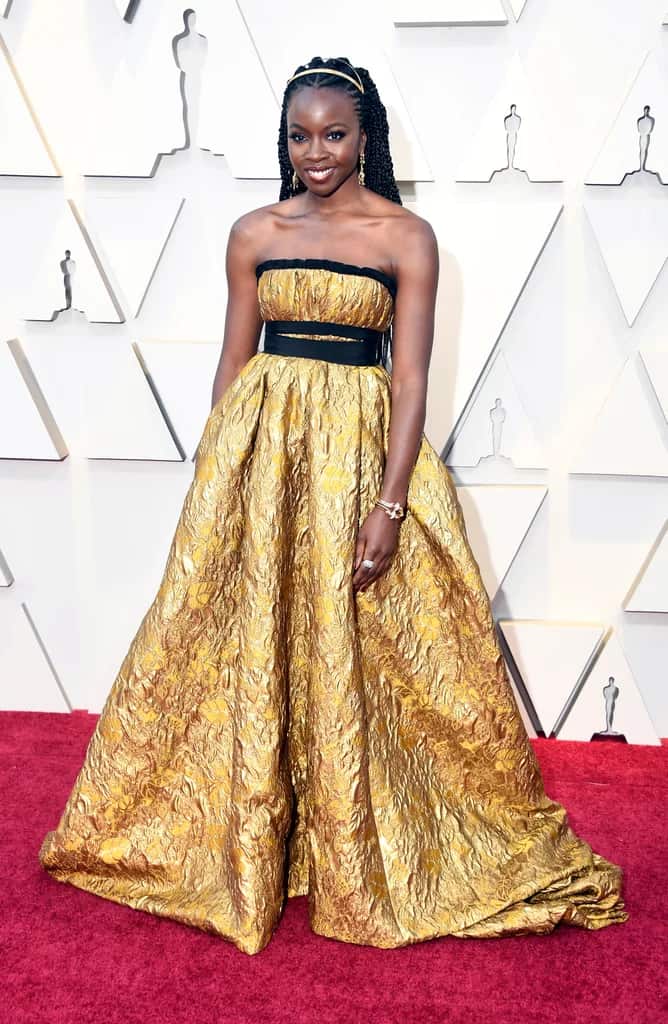 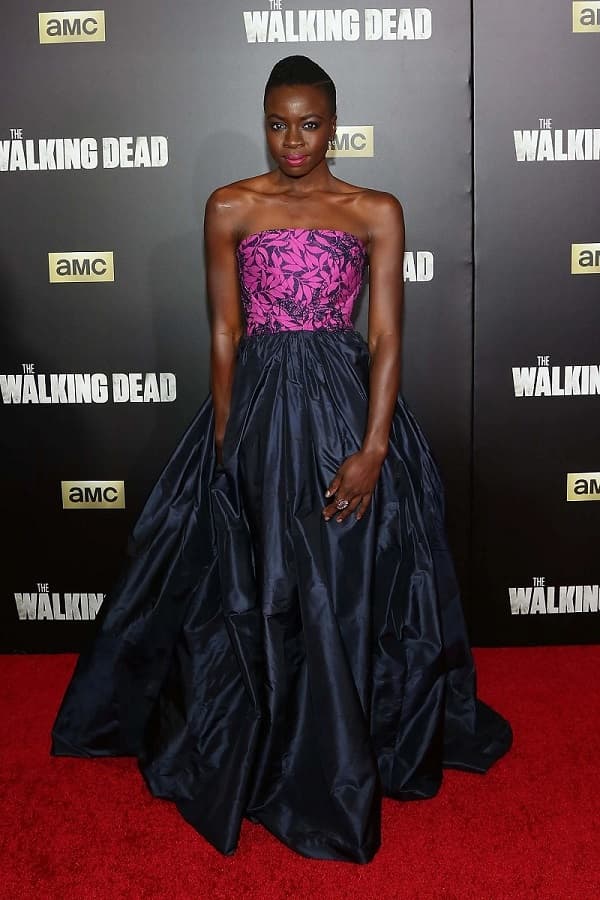 The actress showed up at the 2020 SAG Awards in a form-fitting number by Mugler. (Photo: Getty Images). 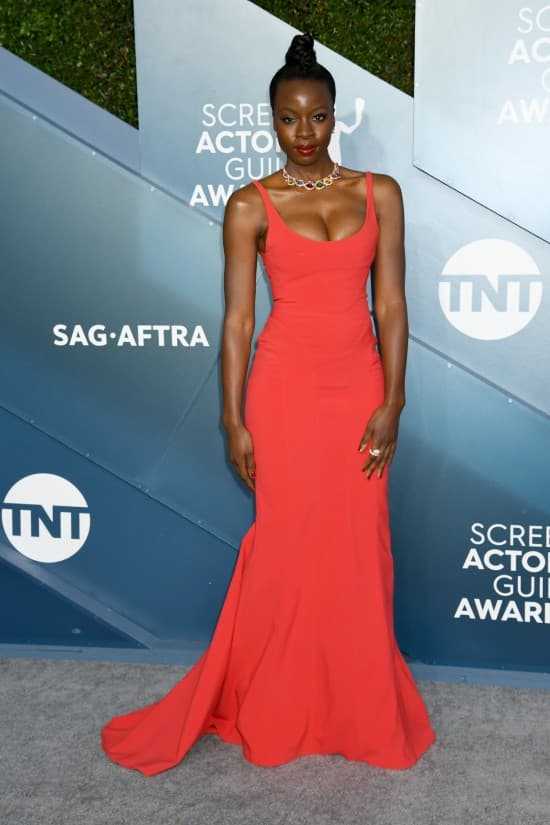 For the 2018 Academy Awards, Danai Gurira made an entrance in a strapless number teamed with her shaved head. (Getty Images). 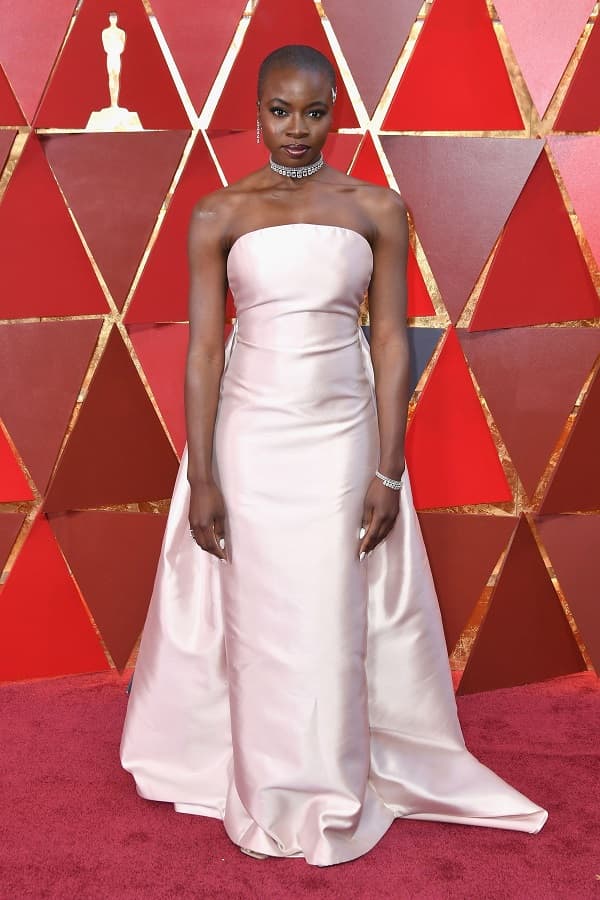 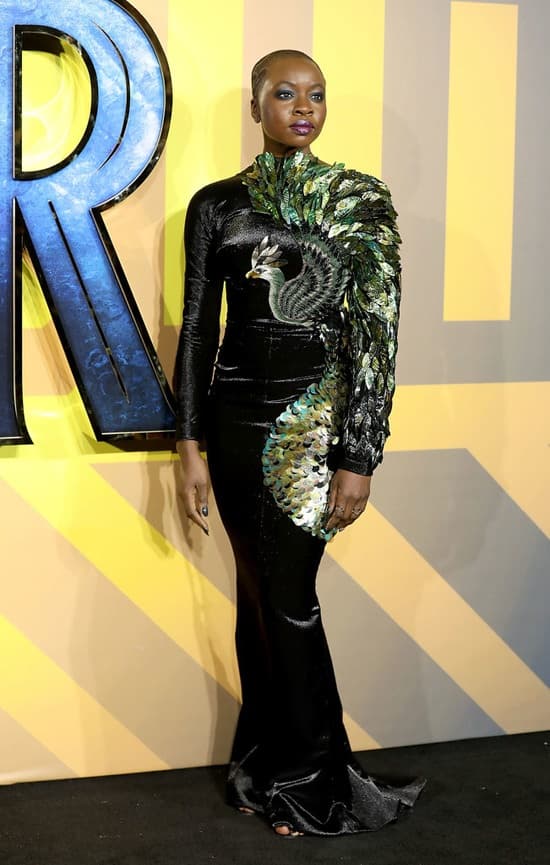 At the 2019 BAFTA Awards, Gurira dressed in a long black gown with a corseted waist. She was at the Glamour’s Women of the Year Awards in 2019, wearing an elegant look from Tory Burch’s spring 2020 collection. (Photo: Getty Images) 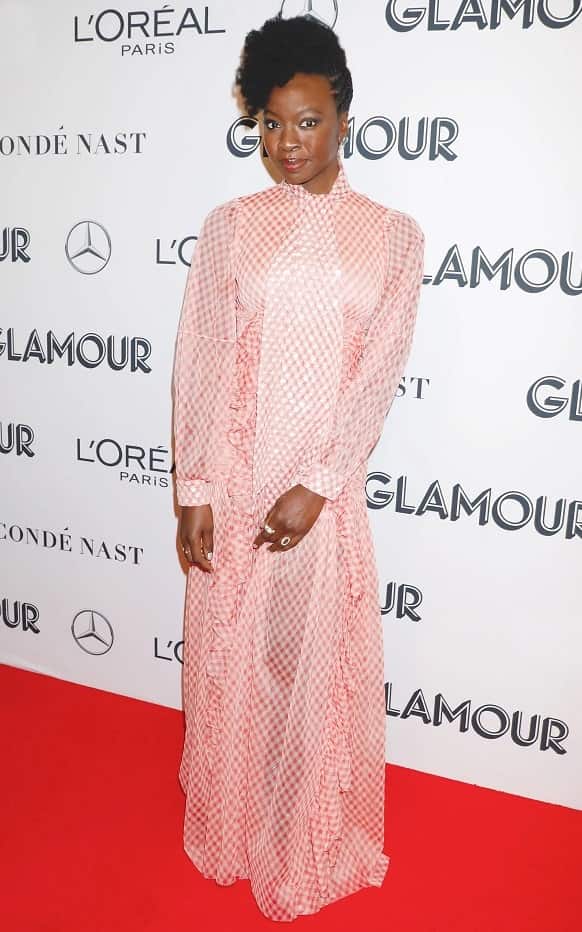 While stepping out for the 2019 Tony Awards, the American-Zimbabwean star stood out in a cream and gold floral long-sleeved gown by Gucci. (Photo: Getty Images). 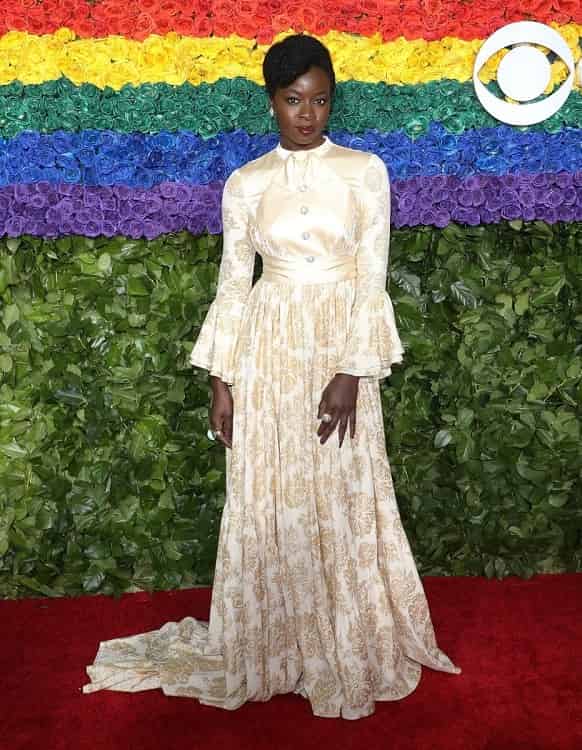 During the 2018 Vanity Fair Oscar after-party, the 44-year-old was stunned in a strapless Gabriela Hearst gown. (Getty Images). 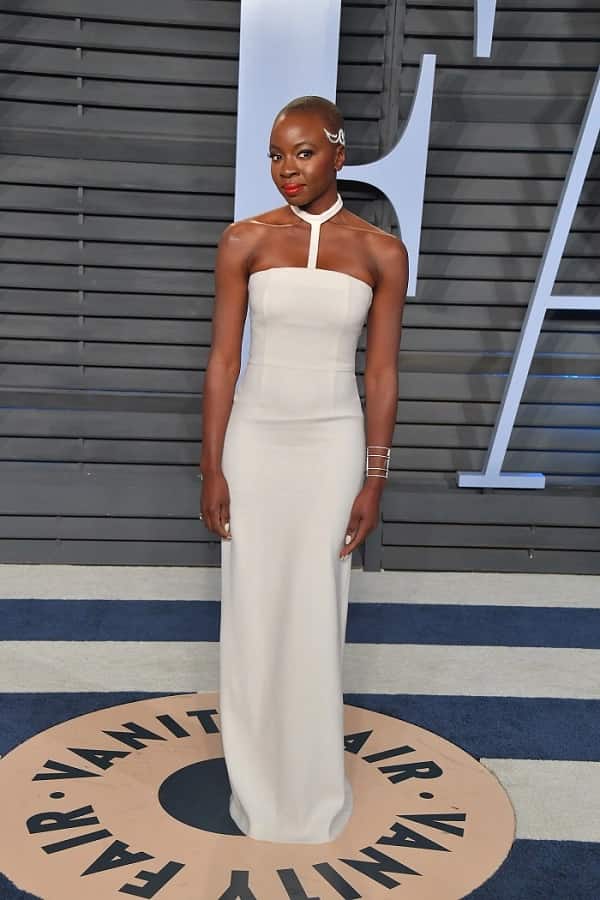 In the same spot at the 2019 Vanity Fair Oscar after-party, the actress appeared again but this time, in a long, white jacket and pants combo. (Getty Images). 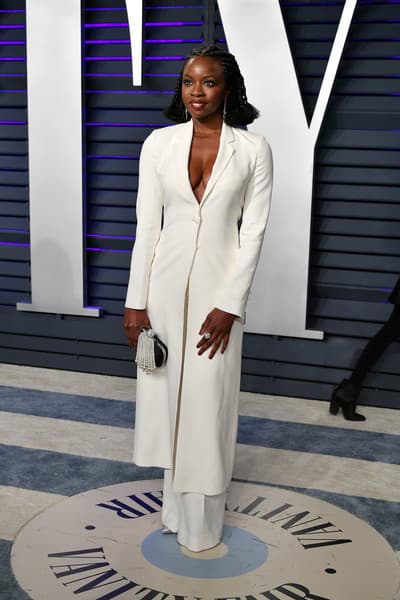 The Must-See Red Carpet Looks From The 2022 Emmy Awards
Every Gorgeous Red Carpet Looks From The 2022 MTV VMAs You'd Want To See
Get To Know Natasha Dlamini, The Zimbabwean Actress Whose Love For Short Haircuts Is Incomparable
Black Panther 2 Is Coming Out: See the First Trailer and All You Need To Know
Serena Gomez Wears the Sequin Silver Cutout Gown on the Red Carpet
2022 Cannes Film Festival: See All The Gorgeous Red Carpet Looks
Nana Akua Addo's 2022 AMVCAs Dress Was Inspired By The Japanese "GEISHA"
All The Gorgeous Looks From 2022 Africa Magic Viewers Choice Awards
Share on FacebookShare on Twitter
Subcribe