For a bride, apart from her wedding day being one of the best days of her life, it could also be one of the craziest. Every bride wants her wedding to go as perfectly as planned and the slightest disruption could put her under enormous pressure. On top of all of these, trust me, there are certain things that you do not even want to mention around the bride. The backstage of every wedding usually has everybody in a flurry of different emotions so you want to be careful with what you say out loud.

Well, now that you understand that, here are 12 things that no bride definitely wants to hear on her wedding day:

At weddings, grooms are well known for mini disappearing acts and arriving at the wedding venue quite late. And since there is no wedding without a groom, breaking it to the bride that you cannot find the groom could be tantamount to a breakdown. If the groom is running late, you would want to keep information like this to yourself and try to find out what is wrong. But whatever you do, ensure that the bride doesn’t hear this because she will break down completely! 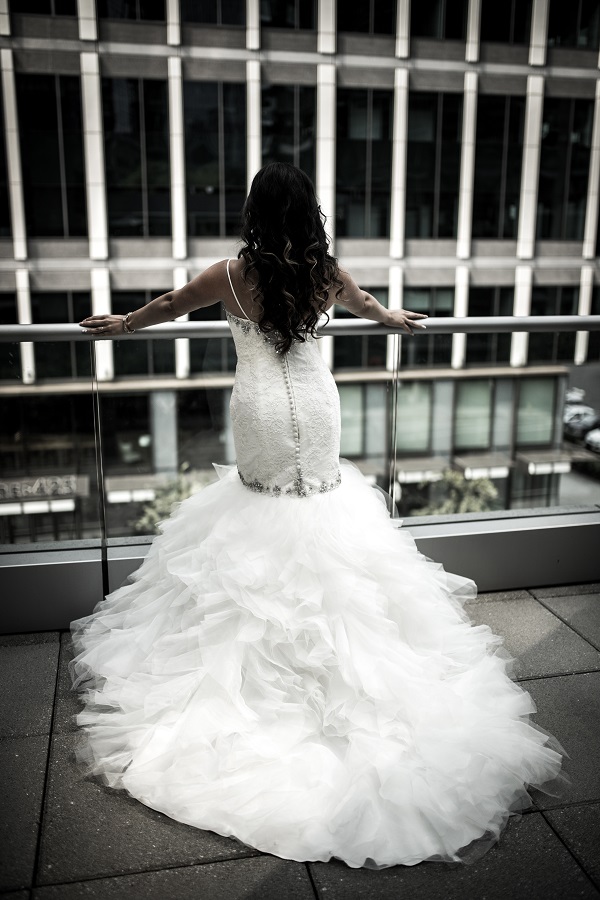 Every bride knows that some things might go wrong but some may not be mentally prepared. Therefore, you never want to walk up to the bride and use “we’ve got a problem” as the conversation opener. By doing this, you might have just created a bigger problem – a disturbed bride. If there is something out of place or not in place, try to fix it and consult with other stakeholders involved in the wedding planning instead. Even if you have to talk to the bride, be very selective with your words.

The bride had enough on her shoulder already since it is her wedding day. She doesn’t need complaints from her closest companions; the bridesmaids to top that up. Bridesmaids are meant to be an anchor for the bride. If any bridesmaid has issues with her dress, make-up, or other props, the bride shouldn’t be disturbed. Instead, she should go about finding a way to fix it.

4. The Rings Have Been Misplaced!

The wedding rings are an integral part of the ceremony and should be handled with utmost care. There is nearly no room for loss of the wedding rings at a wedding. And worse, going ahead to notify the bride! This is enough cause for a meltdown. Before the wedding, the Maid of Honor and best man should ensure that they have triple-checked the rings’ location to ensure that they are intact.

5. Your Bouquet Flowers Have Wilted

No!!!! The bride really doesn’t want to hear this on her wedding day. Especially if she took special care in selecting the flowers, in order to avoid this, you could always have the florist preserve the flowers up until the point when you need them. If the wedding would be done in an outdoor or tropical climate, flowers that would withstand hot temperatures are best. 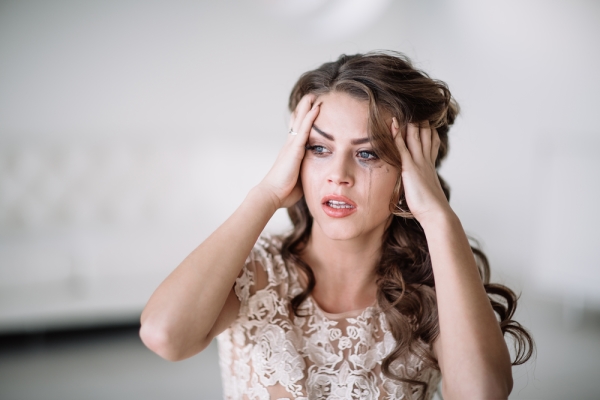 6. Criticism of the Bride’s Dress

Irrespective of your own taste or fashion inclination, you should never make any negative comments about the bride’s dress. It is a very touchy area for her so you want to assure her that she is indeed beautiful. She picked out the dress for a reason and decided to wear it because she loves it. You should be able to live with that.

The car originally selected has a fault and cannot be used again. Or it is no longer available? These are not things that the bride should hear on her wedding day. Instead, look for an alternative and try your best to make it look as befitting as possible. Afterward, you can then gently explain to the bride that there had to be a change in transportation plans. Just don’t tell her before you’ve fixed the problem.

8. There Isn’t Enough Food/ Drinks to Go Round

This is enough to put any bride under untold pressure. This is why it is advised that there should always be extra food/drinks for a situation like this. If there are extras, bring them out and serve the guests. If not, try your best to make a provision. As a matter of fact, all of this goes with the planning.

So if you have a “strictly by invitation” policy, you shouldn’t experience any issues. Food and drinks would be sufficient. In addition, all of these can easily be avoided by following amazing guidelines with enough tips to plan an elegant yet cost-effective wedding.

Delays can easily cause a bride a panic attack on her wedding day. Imagine walking up to the bride and telling her that the wedding would have to be delayed due to issues with the venue.

Or the photo shoot would have to be delayed because the photographer isn’t around. Even worse is if there is a delay with the caterers contracted. These are things that the bride definitely doesn’t want to hear. 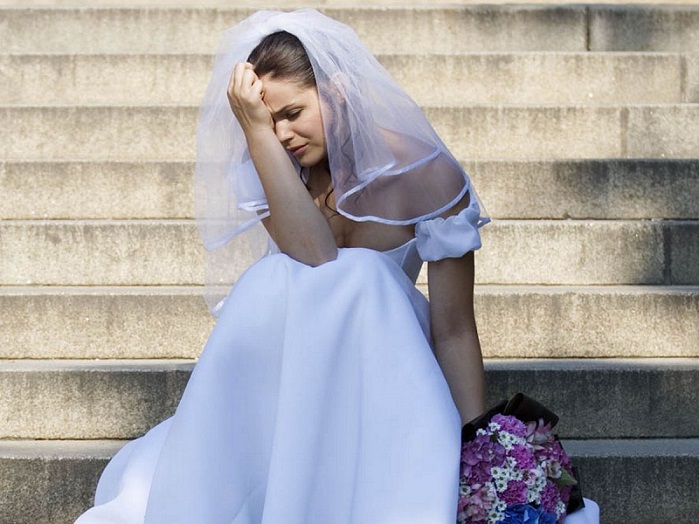 There’s been a what?! No! Mix-ups are about the last thing that any bride wants to hear about just like “we’ve got a problem.” When issues arise and you are using this opening line with the bride, the next thing that comes to her mind is that the wedding can no longer hold.

So you want to keep mix-ups away from the bride and fix them yourself. Help the bride retain her composure and enjoy her day to the maximum.

Trust me, you do not want to carry news like this to the bride. A wedding should be all about the bride, she doesn’t need any other person sharing her day. In this case, she would expect everybody to gush over her; her dress, and her general appearance. She definitely doesn’t need news about someone who dressed beautifully. She should be the center of attention, period.

Irrespective of how lavish the wedding may be, asking the bride who paid for it is a very wrong move to make. Asking how they could afford to have a wedding makes for a very awkward and rude questioning line. And this is definitely not what the bride wants to hear on her wedding day. It should therefore not come as a surprise if you get lashed out as especially since the bride could be on edge.

Besides the bride’s appearance at her wedding, the bride’s appearance is still the next most important thing to her. So no bride wants to hear that her makeup artist/ hairstylist isn’t coming. To her, no excuse is tenable. Does this mean she isn’t going to look beautiful on her big day? No, you really don’t want to be the one to break this to her.

Rather, find an alternative as always, and ensure that whatever alternative that you find a great too. Because next to not getting a trusted hairstylist/makeup artist on the ground, getting one that isn’t great is unforgivable.

14. The Bride Doesn’t Want To Hear the Groom Has a Side Chick

During a wedding, there are about a thousand things to talk about. There would be the bride to gush over, there would be friends to do some catching up with, and there would also be some minor stuff to put in place. But instead of doing all of these, you decide that the best place to tell the bride that the groom has got a side chick is at her wedding. Doing this would definitely ruin the bride’s mood and a sad bride makes for a sour wedding. If you have information like this, and you feel obligated to tell the bride, ensure that you do it well before the wedding when there would still be a chance to cancel and save money. 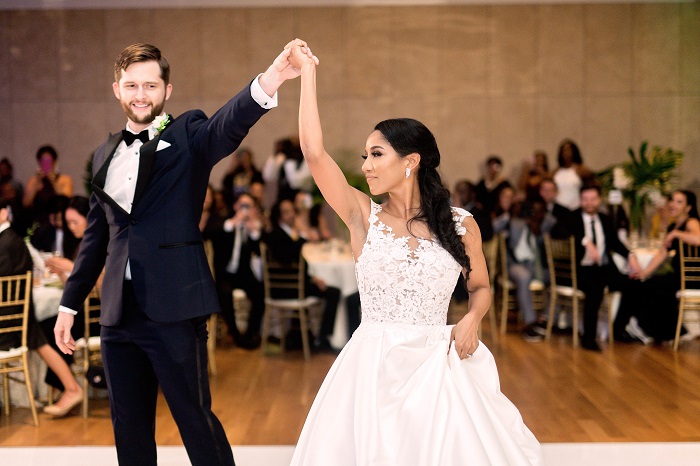 15. Don’t Tell The Bride Not To Dance

Wedding day is one of the biggest days in a woman’s life — a day she’s been waiting for after she finally found the man of her dream and of course, this day marks the beginning of her life. So, how can she not express her joy and show some dancing steps? It is really her choice on whether she wants to dance or not. Do not help her make this decision! No matter how uncoordinated or ‘not so great’ her dance steps may be, allow her to celebrate to the maximum. You don’t want a dull bride and a bunch of cheerful guests, this just isn’t right. So if the bride says that she wants to dance, let her let loose, it is her choice!

In summary, when you’re around the bride, you should be very conscious of the things you say because a happy bride is a successful wedding. Trust me, you really do not want to be the cause of a meltdown.

Beauty Tips to Look Your Best at Every Age