Beyonce Is Wearing The Neon Green Trend Like No Other

Everyone is once again going wild for the neon green trend this summer.

However, if you’re growing tired of channeling your basic hues — think white, black, or the season’s favorite, pastel, why not switch things up with neon? Indulging in such a bright and striking color trend is a great way to unapologetically embrace the season just like Beyonce is doing here.

Last night, the mother-of-three was on Instagram again, and per usual, showed off a chic new look. Wearing a little long-sleeve minidress with matching pumps that put her elongated legs on display, Bey streamlined the ultra-sleek look with a coordinating handbag complete with chunky hoops earrings and dimmed eyeglasses. She also wore her signature bouncy curls while striking a pose for the camera. 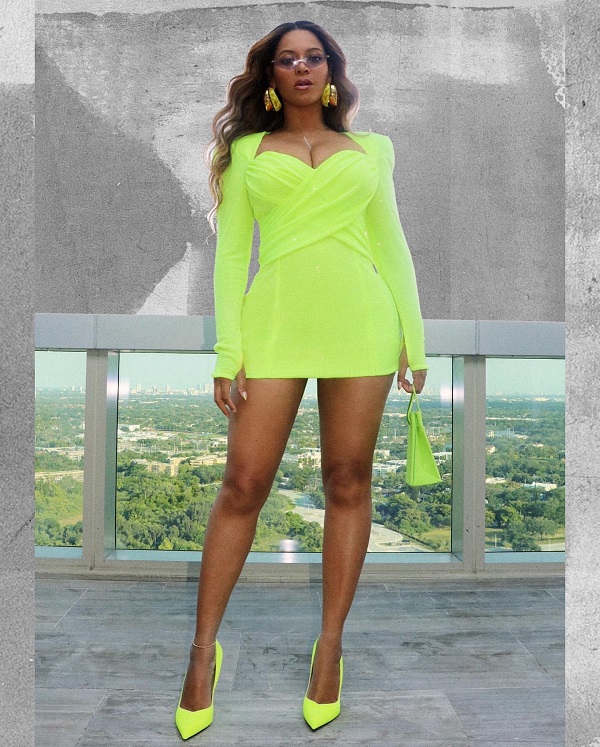 The post, however, had no caption but fans were quick to rave the 39-year-old her latest look.

Meanwhile, the multi-grammy award winner celebrated the 5th anniversary of her sixth solo studio album, Lemonade, thanking all the creatives who participated in the project. “I’m grateful that this body of work has resonated so deeply with so many people,” Queen Bey wrote on Instagram along with a photo gallery from the music video. “I’m so thankful for all the beautiful souls involved in making one of my favorite pieces of art. As I celebrate five years of LEMONADE, I encourage everyone to continue healing, loving, forgiving and uplifting.”

The 12-song visual album debuted on April 23rd, 2016, and became the No. 1 hit on the Billboard 200, earning the singer her sixth-chart topper. Singles such as “Hold Up,” “Formation,” “All Night,” “Sorry,” and “Freedom” were notably the top hits at the time.

Here's How To Tell If Your Makeup Has Expired

You Are Soon Going To Wear Valentino Makeup

Rihanna Styles Herself And Dazzles In Every Way On Vogue Italia

7 Tricks That Will Make You Feel Good and Look Great

How To Make Your Lace Wig Look Like Scalp

How To Choose The Perfect Men’s Wallet

See All The Looks From Chanel Cruise 2021 Collection

We have a keen interest to improve the lives of women by delivering inspiring, interactive and shoppable fashion and beauty contents. With this in mind, you can expect to find the latest trends, runway shows, celeb fashion, street style, tips and more.
We also strive to maintain a truthful and unbiased compendium of knowledge, both in original content, curated contents, product reviews, and everything in between.