Remember Chrissy Teigen’s insanely high-slit gown during the 2016 American Music Awards that caused her a serious wardrobe malfunction? Or Kendall Jenner’s look at the 2019 Vanity Fair after-party? We thought the days of super-slit were long gone but surprisingly, it’s a style move that Nollywood actress and TV host, Idia Aisien, must have loved too — because she just brought it to the 2021 ELOY Awards last night.

There, in a room full of the audience, the actress stood out for all the right or wrong reasons immediately she hit the stage to receive her award in bright mustard confection. Aisien wore a glorious but risque floor-length halter gown with a thigh-high leg slit way up to her waistline and a generous keyhole cutout at the cleavage. Designed by Ogé by Oge, she finished the beautiful number with a pair of barely-there ankle heels and carried a tiny clutch. Thing is, we are not sure what would happen if she posed in that dress from all angles but to say the least, the actress made quite a statement. 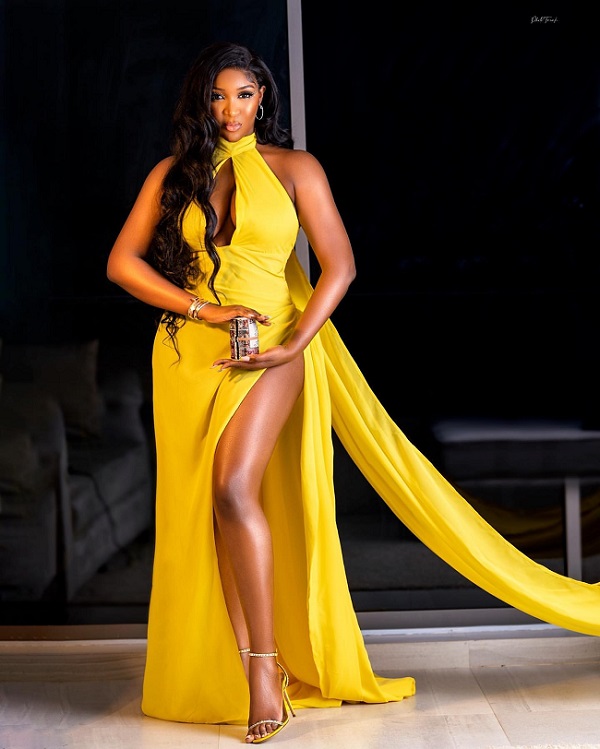 Her hair was styled in exquisite wavy curls to flow down the shoulders, with one side parted to highlight her beauty game. The Nollywood breakout star opted for perfectly contoured cheeks with complimentary dark eyeshadow and pink lips. She also accessorized the look with hoops earrings and gold bangles.

Idia Aisien won this year’s ELOY Awards for ‘Best Actress in the movie: Nneka the Pretty Serpent. This comes after she was nominated in the category and subsequently received the highest votes. She however dedicated the trophy to colleagues, supporters, and of course, the fans.

“We won!!! Thank you so much to everyone who nominated me and to those who voted!!,” the actress wrote on Instagram. “This award is dedicated to my family, @playnetworkstudios @tosinigho @chrisodeh @winifrediguwa and everyone who worked on NTPS!! But most especially my fan page @idia.aisien.fp I heard how hard you guys rooted for me. I love you; God bless you!!💛💛 👑👑✨✨.”

But whatever the case may be, we have to admire the actress’ daring approach as she pulled it off with aplomb.

Toke Makinwa Steps Out In Neon Green Sweats In London