Vigil Abloh may have passed on but his legacy lives on.

On Monday, February 28, the first day of Paris Fashion Week Fall/Winter 2022, Serena Williams made a surprise appearance during the Off-White show to honor the late founder and designer Vigil Abloh, who passed away after privately battling with cancer in November 2021.

As an amplifier for the voices of the Black community which Abloh was known to be, the show was labelled a ride on “Spaceship Earth” and attracted a myriad of close friends, admirers to ride along. Some of them included Idris and Sabrina Elba, Rihanna and A$AP Rocky, Pharrell Williams and his family, as well as designer friends such as Olivier Rousteing, Jonathan Anderson, Matthew Williams, Guram Gvasalia, and Jerry Lorenzo.

According to BoF, the runway show was divided into two parts — and one was a display of the brand’s ready-to-wear collection for the upcoming season while the other was rather a presentation of its “couture-like ‘high fashion.”

Taking the catwalk was none other than Serena Williams, Abloh’s longtime muse who breezed through the runway in a clingy printed, high-neck long-sleeve dress with pants. Williams wore her voluminous loose curls with full face makeup. 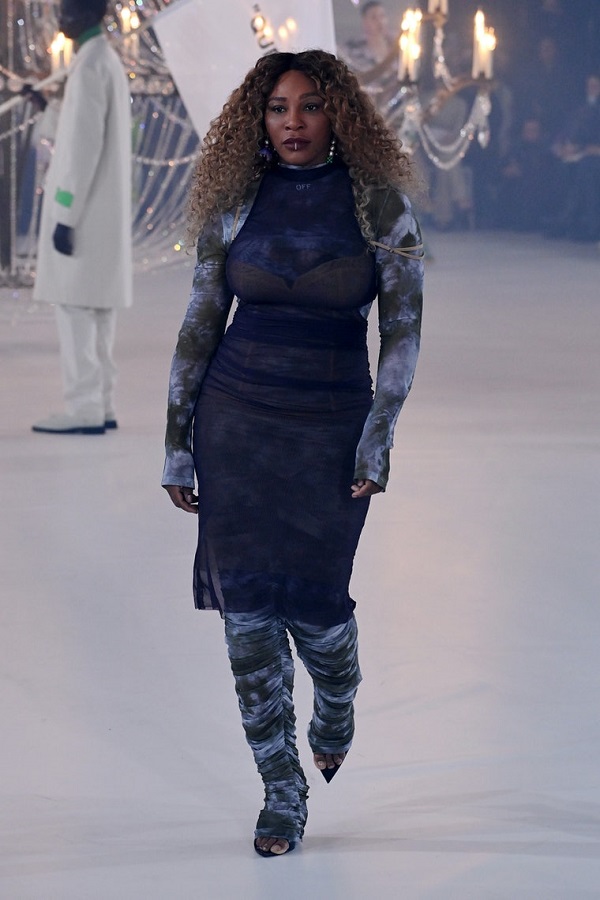 She later took to Instagram to express her gratitude for taking part in the show along with snapshots from behind-the-scene. As per the Tennis Champion, Vigil meant so much to her. “I had an unbelievable time walking in the @off____white show …,” Williams captioned the post on Instagram. “Virgil meant so much to me, and to walk in a collection that he was still a part of was something I could not miss. Thank you for the opportunity. I am so grateful to show love to my friend.”

Having walked the runway for her own fashion line before, this marks the first time Serena Williams is modeling for a major luxury brand during fashion month. She’s been praised for her confidence by fans on social media with some calling her a ‘Queen.’

Abloh and Williams however started working together in 2018 when the creative director first designed a collection for Nike. In the collection that she wore to the 2018 U.S. Abloh described the mother-of-one as “our generation’s most powerful, inspiring athletes.”

“With Serena, we have one of our generations most powerful, inspiring athletes as the muse,” said Abloh in an official statement on the launch. “I was trying to embody her spirit and bring something compelling and fresh to tennis.”

Your Guide to the Classic Chanel Handbag Styles

The Perfect Guide That You Need For Dressing In Summer