The incredible royal couple, Prince Harry and Meghan Markle has been recognized at the 53rd NAACP Image Awards that took place at the Pasadena Civic Auditorium in California last night. The ceremony was aired on BET and simulcasted on several of its sister ViacomCBS Networks and CBS.

The Duke and Duchess of Sussex received the NAACP President’s Award, a top honor in “recognition of special achievement and distinguished public service.” In typical Harry and Markle fashion, the couple delivered a moving speech when they took the stage to accept the prestigious statue. Harry and Meghan reflected on the Image Awards’ legacy, pointing at the partnership of their Archewell Foundation and the civil rights organization. And with the ongoing Russian invasion on Ukrainian soil, they also call for global support towards the people of Ukraine.

For the event, the Sussex donned a two-tone blue Christopher John Rogers dress with a high leg slit. The sleeveless number featured a floor-sweeping train which she accessorized with ankle strap heels and finished with a flowing, shoulder cascading hairstyle. Harry also wore the same African-American designer, opting for a classic black Ozwald Boateng suit. 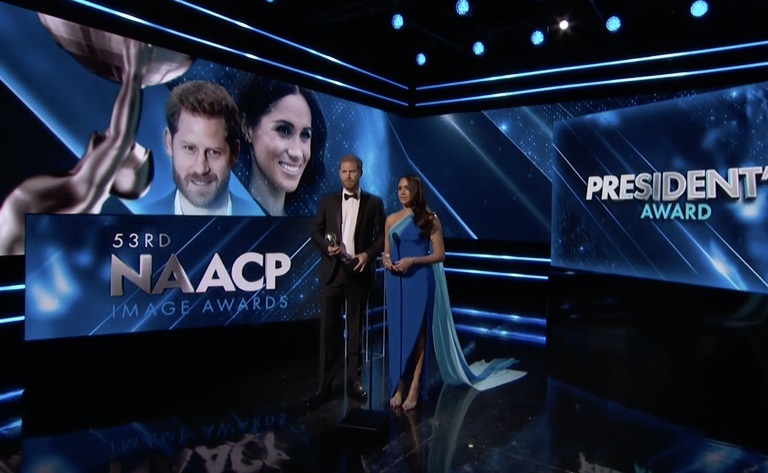 “Before we begin, we would like to acknowledge the people of Ukraine who urgently need our continued support as a global community. And I also echo the immense gratitude for tonight, both for this award and to this community for welcoming me so warmly,” Prince Harry said in the joint speech that both of them spoke after each paragraph.

Past winners of the Image Awards include Jesse Jackson, Condoleeza Rice, Muhammad Ali, and Colin Powell among other key African-American figures in U.S. history. More recent winners include sports and entertainment figures such as LeBron James, Rihanna, and Shawn “JAY-Z” Carter.

Thank you so much [NAACP] President [Derrick] Johnson for this incredible honor. It’s inspiring to think about the legacy surrounding the Image Awards, which began shortly after the Civil Rights Act of 1964 and the Voting Rights Act of 1965 were passed into law. And today, we can continue that legacy by reestablishing federal voting protections in our country and fulfilling the work of civil rights giants like the late John Lewis. We are so deeply humbled to be here in the company of so many illustrious awardees.

Before we begin, we would like to acknowledge the people of Ukraine who urgently need our continued support as a global community. And I also echo the immense gratitude for tonight, both for this award and to this community for welcoming me so warmly. I think it’s safe to say that I come from a very different background than my incredible wife. Yet our lives were brought together for a reason. We share a commitment to a life of service, a responsibility to confront injustice, and a belief that the most often overlooked are the most important to listen to.

And I couldn’t be prouder that we’re doing this work together. We moved to California, my home state, shortly before the murder of George Floyd, and for Black America, those nine minutes and 29 seconds transcended time, invoking centuries of our unhealed wounds. In the months that followed, as my husband and I spoke with the civil rights community, we committed ourselves and our organization Archewell, to illuminate those who are advancing racial justice and progress.

In that spirit, we partnered with the team here to create the NAACP-Archewell Digital Civil Rights Award, which will be given annually to leaders creating transformational change at the intersection of social justice and technology.

And last night, President Johnson presented this new award to its first recipient, Dr. Safiya Noble, Co-Founder of the UCLA Center for Critical Internet Inquiry. A renowned scholar, author and advocate. Dr. Noble is a visionary and partner to Archewell.

Safiya’s work speaks to a new chapter in the movement for civil rights. This community knows what it means to speak up for what is right, and to march for what is just. As the fight for justice still remains, it’s time to extend this march to the world online, a place where hate and discrimination are fueled instantly, propagated globally, and felt deeply.

This is the era of the digital justice movement. We are proud to partner with NAACP and each of you to translate the vital efforts of those who came before us to the modern challenges that exist ahead of us. Thank you so much for joining us in this work, and thank you again for this incredible honor, truly. My mom’s here with us tonight and we all feel very proud. Thank you.

Dresses at Milan Fashion Week are Fun and Entertaining

SAGS Awards: All The Stunning Red Carpet Fashion You Need To See