If you know Issa Rae in her HBO comedy and drama, you know she’s one girl who was never certain about her relationship. Having had a failed relationship with her long-time boyfriend, Jay Ellis who plays Laurence, Rae began to jump from one guy to another and eventually decided to put the spark back with Laurence.

However, life may have seemed so insecure for the actress in the American comedy-drama television series but in reality, she’s got things under control. The 36-year-old actress and television mogul has tied the knot. She quietly married her longtime fiancé, Louis Diame, in an intimate outdoor wedding ceremony over the weekend. in Paris.

Rae took to Instagram earlier today to surprise friends and fans with beautiful wedding photos of herself posing with her gorgeous bridesmaids and husband who looked dapper in his red and black velvet suit. 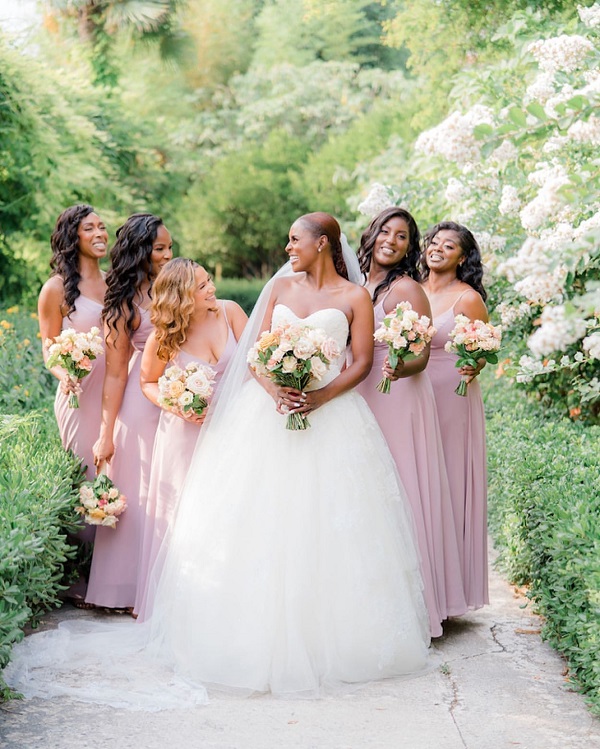 “A) Impromptu photo shoot in a custom @verawang dress,” the actress joked while also thanking the wedding planning service. “B) My girls came to help me, but they all coincidentally had on the same dress! They were sooooo embarrassed. C) Then I took a few flicks with Somebody’s Husband.”

For the bid day, Issa wore a strapless tulle wedding gown with a sweetheart neckline by Vera Wang, a look she finished with metallic silver peep-toe pumps and simple diamond stud earrings. Her subtle makeup and nude lips complemented her chocolate melanin skin as her hair was styled into a voluminous, slick-back low ponytail. The beaming bride added her famous smile into the look and one could easily feel the excitement.

According to the reports, Rae was engaged in 2019 and has been dating since 2012 but kept their relationship private. Their engagement news was however confirmed by Rae’s Insecure co-stars Jay Ellis and Yvonne Orji during the 2019 NAACP Image Awards.