When the bride, Ngozi Udenwa became a housemaid to Ada Ujaligwa far back in the year 2000, she never knew she’d one day become her adopted daughter neither did she know she’d one day strut her pins down the aisle in a highly coveted wedding gown. But you see, “diligence is the mother of good fortune” and Ngozi knew this and she certainly put her best foot forward while working with her employer. Fast forward it to 2017, Ngozi’s diligence has paid off — she’s now her employer’s legal adopted daughter, lives and studied abroad, and recently married in the dreamiest wedding gown you can ever imagine.

In a Facebook post shared by her now-mother that has already gone viral, Ujaligwa revealed that Ngozi was a one of a come kind when it comes to a domestic employer: 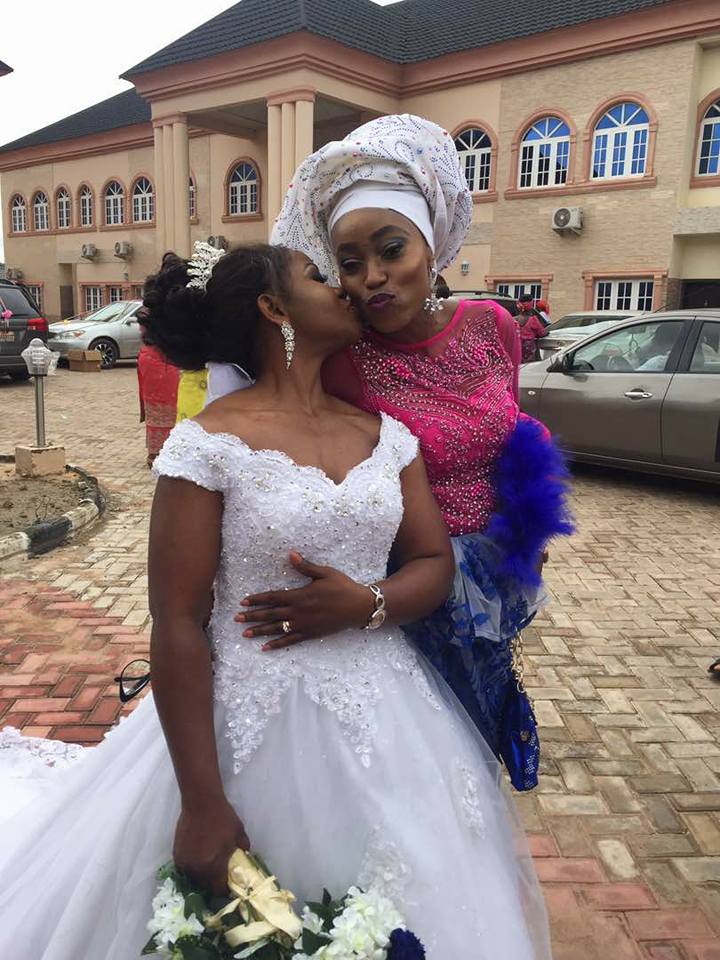 In the year 2000, barely 2 months after I gave birth to my first child, by sheer happenstance I got a second househelp….. My first househelp had gone home to see her family briefly and I needed someone to cover for her until she returned….. My parents got me the second househelp to help me with my new baby so I could face my studies squarely, seeing that I was a 5th year medical student at the time. That second househelp was Ngozi Udenwa my daughter….. She was only to stay with me for a short while, just a few days but she ended up staying with me until the 5th of August 2017….. More than 17yrs in total!!!

When she came into my care, she was a lovely, humble, lowly, young innocent beautiful girl whose only ambition in life was to be sent to school….. She had completed primary school but was yet to commence secondary school….. She was very passionate about going to secondary school at all cost, and I assured her that not only would she go to secondary school, she would also go to the University and be a huge success under the care of my husband and I….. To the glory of God’s mighty name Amen.

And so our journey started….. I quickly observed that she was a very humble, patient and kind hearted person….. Ngozi approached every task you gave her with equanimity…. She was never flustered nor irritated….. She always did her tasks thoroughly and with great conscience ….. She was also particularly honest, trust worthy and hard working, she hardly ever complained about anything and when she did, I always took her seriously, knowing that for her to talk, it must be something of great significance ….. A very mild mannered, meek, respectful, tolerant and peaceful young lady….. She was a pleasure to have in my home….. She treated my children like she was their own mother, she would cry when they were sick, I was amazed at the love she showered on them whether I was around or not, her behaviour towards them was always the same…. She treated them exactly the same in my absence as she did in my presence….. And that was one of the best things about her….. She was always without any form of pretence….. Ngozi did not know and still does not know the meaning of “eye-service”….. With her what you saw was what you got whether she was being watched or not….. The consistency in the goodness she exudes greatly endeared her to my husband, myself and all the members of our families who had the opportunity of dealing with her….

Everyone admired the dedication with which she loved and cared for my children and my home….. She is the kind of person you can leave your kids with and go to Timbuktu and sleep with your 2 eyes closed, confident in the knowledge that your children would be cared for as if you were the one caring for them yourself…. As the kids grew older, they testified to the goodness of Aunty Ngo as they all refer to her …..

My husband and I enrolled her in secondary school as soon as she settled into our home….. And she proved to be an intelligent, ambitious and focused young lady to our collective delight….. She knew what she wanted and she set out to achieve it….. By the time she came to our home, her biological mother was already deceased, a few years into her secondary education, she also lost her biological father….. And became an orphan biologically….. As time went on, we decided to relocate abroad and we decided to legally adopt her and take her with us….. By then she had lived with us for 4 years and we were pretty confident that we were doing the right thing and that with God on our side, neither of us was going to regret the move to make Ngozi our legally adopted daughter, with all the rights and privileges that go with her newly acquired status….. The adoption process was rigorous but we succeeded in the end and we brought her with us to Ireland….. My husband and I promised her that if she remained as loyal, respectful, hardworking and peaceful as she has been, then we will ensure that she becomes a university graduate and an Irish citizen, God willing.

She became a very important member of our family, providing the much needed robust domestic support while she was enrolled into the Irish educational system to work her way into the tertiary institution here….. Through us she became an Irish citizen

👏and soon got a good job while she continued to study…..To the glory of God’s mighty name Amen….. And this year she graduated from the University

👏….. I am so grateful to God and proud of her for achieving this great feat because I know just how much she wanted this….. And less than a month after she graduated, she got married to her Prince Charming….

👏…. Talk about everything coming together for good to those who love God, who work according to His purpose…..

Ngozi could have given us hell in Ireland if she wanted to…. Infact she was advised to do so by some unscrupulous elements when she was about to leave Nigeria with us …. But she CHOSE to give us peace and joy and in return she is reaping peace and joy…. She played a key role in maintaining the stability of my home and now she will enjoy great stability in her own home, as it has pleased God….. We have become so close as mother and daughter that I hardly remember that she was once my househelp….. We have a deeply confiding relationship and my children are as much her children as they are her siblings too….. They love their Aunty Ngo so much and won’t hesitate to fell anyone who stands in the way of her happiness….. They are that protective of her. 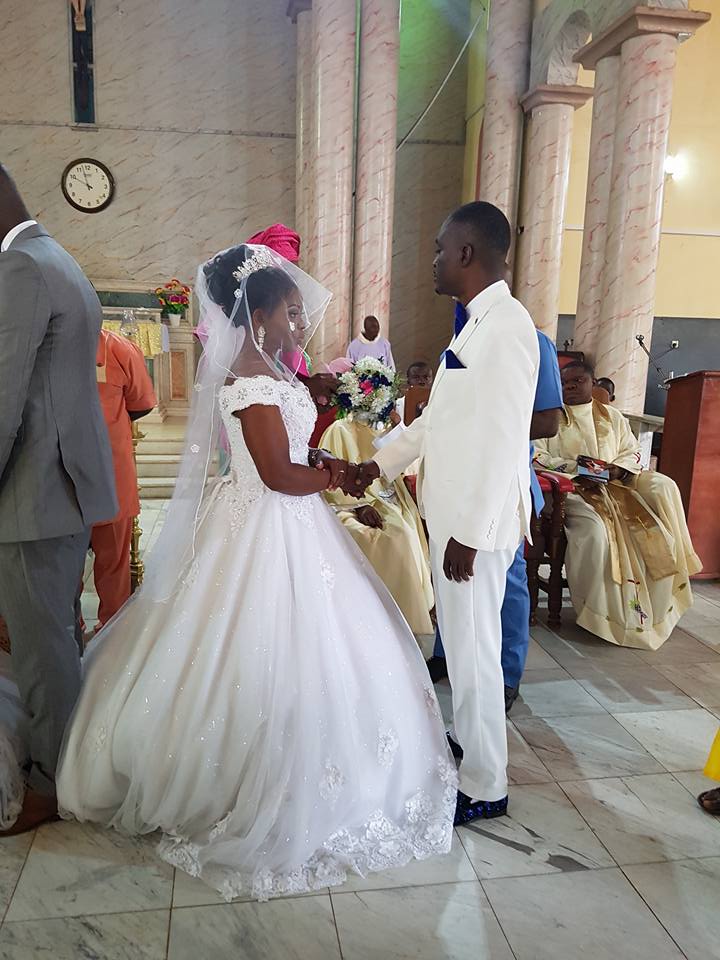 As for her wedding gown, Ngozi was looking gorgeous in an embellished number complete with the sparkliest accouterments, including a silver tiara, drop earrings, and a pair of beaming heels meant for a deserving bride like her. 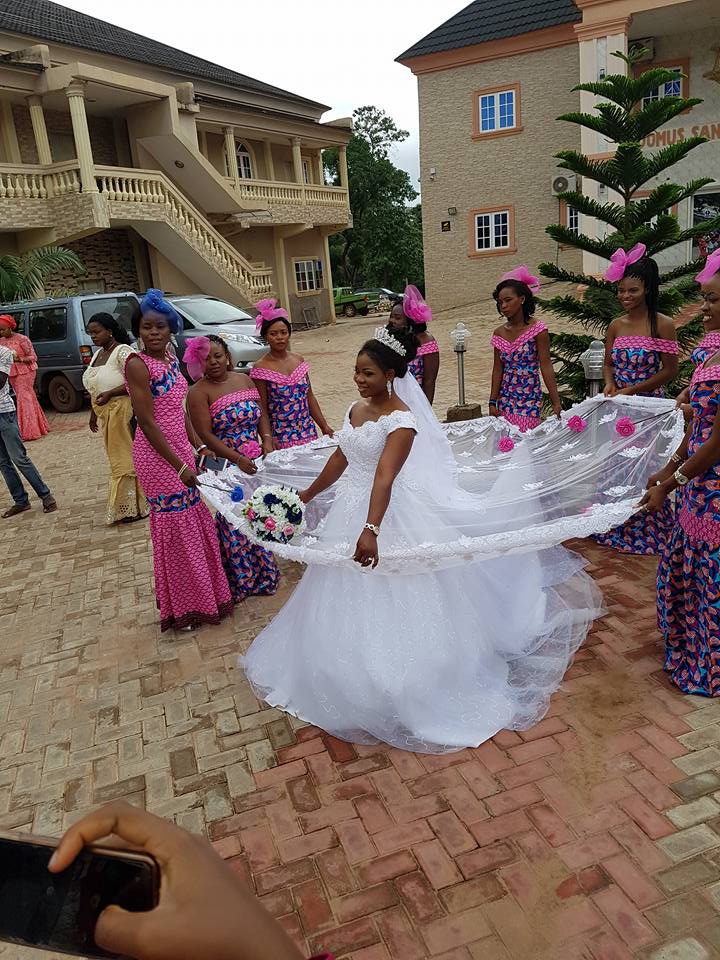 Rita Dominic and Her Bridesmaids Bundle up in Winter Jacket Ahead of Her Wedding
See the Gorgeous Bridal Looks From Atafo's SS23 Bridal Show
Bridal Tiara: The True Meaning and Significance Behind this Timeless Tradition
The Bride's Guide To Selecting The Right Bridesmaid Dresses
Matopeda's Latest Bridal Collection Is What True Glamour Looks Like
What Exactly Does The White Wedding Means For Africans?
The Close-Up Look At Jennifer Lopez's Ralph Lauren Wedding Gown To Marry Ben Affleck
Alicia Keys and Swizz Beatz Celebrates 12th Year Wedding Anniversary Of "Pure Love"
Pages: 1 2 3 4 5 6
Share on FacebookShare on Twitter
Subcribe

There's Nothing Sparkling On The Red Carpet Than Toke Makinwa's Dress

The Bride’s Guide To Selecting The Right Bridesmaid Dresses